Do you know where the highest concentration of Salvadoran immigrants live in Indianapolis?

If you guessed the Crooked Creek neighborhood near Michigan Road, you’re correct!

I learned the answer last week at a free Lunch and Learn presentation on the country of El Salvador at the Michigan Road Library branch. The event series is a partnership between the Indianapolis Public Library and the Immigrant Welcome Center designed to help the community become familiar with the many cultures represented in Marion County.

I’ll admit, I knew next to nothing about El Salvador before the presentation. Luckily, William Esquivel, a native of El Salvador, and Indianapolis resident was there to give participants like me a crash course in Salvadoran culture and customs. Here’s what I learned: 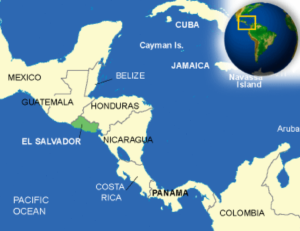 El Salvador is the smallest of the seven Central American countries found between Mexico and the South American continent. Honduras lies to the north and east, Guatemala is northwest, and the Pacific Ocean is south of El Salvador.

The country lies on a fault line, so earthquakes and volcanic activity are common. El Salvador is known as “The Land of Volcanoes” because of its 20 active and inactive volcanoes.

The Chaparrastique volcano erupted in 2013 and 2016, causing residents to evacuate because of spreading ash. Other volcanoes include Chincontepeq, Tecapa, and Izalco, which had been active for 197 years before it stopped in 1976. The country has a tropical climate and volcanoes help regulate weather and humidity.

There are seven million people in El Salvador. Uninhabited land is often cut down to cultivate crops in an effort to feed more people. The most popular crops exported from El Salvador are coffee, cotton, corn, and sugarcane. Crop cultivation affects the diverse animal and plant life of the country, though the country is still known for colorful plants including the maquilishuat, the country’s national tree, flowers, and animals. One fruit I learned about is the marañón, called a cashew apple in English, that has edible cashew nuts growing out of its stem. The fruit is in season December through April in El Salvador.

Although El Salvador’s official language is Spanish due to Spanish colonization, native Mayans and Pipils inhabited the area generations before the arrival of the Spaniards in 1525. The Spanish language, customs, and religion remained dominant throughout the country’s nearly 300 year rule to the current day.

Now, most of the population are called Mestizos, which is an ethnic mix of Europeans from Spain and indigenous peoples.

The church still has a large impact in El Salvador today and customs, traditions, and events center around the church. The majority of the country’s inhabitants are Roman Catholic or Protestant. Many cities are named after Catholic saints and celebrations are held on saint feast days that include processions, parades with costumes, music, dancing and food.

El Salvador was in a civil war from 1980 to 1992. Close to 40% of the population relocated at that time, with 20% completely leaving the country. After war recovery had barely begun when El Salvador was devastated by Hurricane Mitch in 1998 and an earthquake in 2001.

Rapidly increasing crime and gang violence, slow economic growth, and poverty have all contributed to increased migration from the country in recent years.

Native Mayans used pottery in their artwork, and the tradition continues in contemporary art. Folk artisans often depict animals and fruit in their pottery pieces. Visually, the Salvadoran art style is characterized by bright colors and simple shapes. Fernando Llort is a famous Salvadoran artist who shared his art techniques with his community and gave local artisans in the village of La Palma the opportunity to train and make a living from their art. His most famous work is Abrazo Fraterno, or Fraternal Hug.

Salvadoran cuisine is based on natural ingredients and home cooking is more common than eating at restaurants. A traditional dish of El Salvador is the pupusa, which is a thick corn tortilla stuffed with meat, cheese, or beans. Participants got to sample pupusas from La Guanaquita, a local restaurant on 38th Street in Indianapolis that serves traditional Salvadoran cuisine.

I’ve been inspired to visit La Guanaquita to taste even more of their delicious food. Check out more of the tastes of El Salvador in a blog to come!