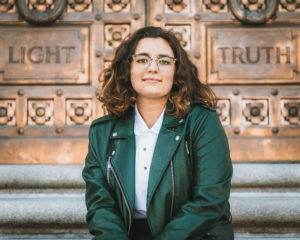 If you were sorted into any of the Harry Potter houses, which one would it be?

I’ve been given both Ravenclaw and Slytherin which makes me skeptical of the whole system.

Why did you apply to be an Indy Reads AmeriCorps WorkLiteracy Coach?

I applied to join Indy Reads because I had been aware of the organization for a few years and was really interested in helping out in any way I could. I did my undergraduate degree at Butler University, and the Indy Reads bookstore was really popular with students, so the organization had been on my radar for a while. Graduating during the COVID-19 pandemic, it felt urgent to do something that would be beneficial to my community in some way. I had been planning to move to Indianapolis permanently after graduation, and finding a job that would help me become a part of the larger Indy community outside of the Butler Bubble was extremely lucky. I feel very privileged to work with these students and learn from them.

Before starting Tutor Talks, which is Indy Reads’ staff book club, the last book I read was The People in the Trees by Hanya Yanagihara.

What is a quote you love or a mantra you live by?

Not necessarily a mantra, but it’s an important quote from an important book: “Did you ever see anyone shot by a gun without bleeding?” from Sputnik Sweetheart by Haruki Murakami

I have too many! In Broad Ripple, I love the Bagel Deli as well as Shalimar Indian Restaurant. My favorite restaurant downtown is ThaiTanium on Mass Ave, which I’ve been to at least two-dozen times.

What do you like to do in your spare time?

Cook, write, and listen to music. I have a small but strong record collection.

Favorite memory so far as an Indy Reads AmeriCorps Member?

Either finding out when two of our students passed their High School Equivalency Exam, or having one of our upper-level ELL students use American slang that we had taught her. 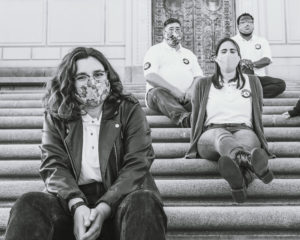