When Veronica moved to the U.S. in the early 2000s, taking care of her family became her number one priority. But as her children grew older, she knew she needed to make a change — she didn’t want to keep relying on her kids to be her translators.

“I felt I really needed to learn English,” Veronica says. “because I want to express myself and communicate on my own.” 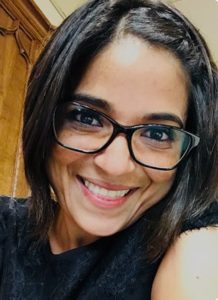 Moving to the U.S. and to Indianapolis was one of the most important decisions of Veronica’s life: She knew that she’d have the opportunity to pursue a career if she wanted, or to continue caring for her family at home. But it didn’t take long to realize how isolated she was without stronger English literacy skills.

“In school I received English classes,” she says. “But honestly nothing applied to our life here.”

Veronica discovered Indy Reads from a connection’s post on Facebook, and decided to take a chance on signing up. “I had attended [English language] programs, but I always felt I needed more help,” Veronica said.

With the aid of her teacher, Paul, and dedicated volunteer tutors, Veronica’s skills improved dramatically: “After a semester, Paul and the volunteers helped introduce me to new vocabulary to use in different situations.”

Veronica, the care of her kids on her mind, came to America to give her family the best chance at an even brighter future. And, with Indy Reads, Veronica was able have some care for herself, as well. Today she’s using her new skills in the workplace. “I miss my friends, my instructors, and the volunteers,” she says. “But I’m thankful to Indy Reads for the opportunity!”

Previous StoryA Bookstore Tour for National Literacy Month!
Next StoryJoin Us On An In-Town Trip to Honduras!