When Donya arrived in the U.S. five years ago, she thought she would be moving to a new land of opportunity. Instead, she was almost immediately confronted with what she calls the most challenging experience of her life. 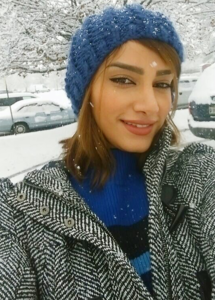 “It was like breaking out of a bubble and being thrown into a world of strangers,” Donya says. “I couldn’t speak English well, and could not read it at all. It isolated me.”

She began taking classes at a language training center in Indianapolis, but the expense quickly outpaced her family’s earnings. “I found other resources. I continued my English through a self-study,” she told us. “I passed the academic GRE and TOEFL tests [required for admission to many education programs], but I still was not confident enough in the language.”

That’s when Donya found Indy Reads. She enrolled in the Community Classrooms program for English Language Learners, and saw an immediate difference.

“The activities were meaningful and entertaining; it is not easy but we also play learning games and the atmosphere is relaxed,” Donya says. “It is the best condition to learn. Indy Reads not only helps its students to thrive linguistically but also socially.”

After a few short months in Indy Reads’ classrooms, Donya is ready to take on her next challenge. “Fear and anxiety were my big obstacles, which kept me from melding in the society where I was supposed to build up my future,” she says.

“Overcoming this obstacle was not possible without Indy Reads.”

Congratulations to Donya on all your progress! We’re so proud to have been a part of your story, and look forward to hearing all about your successes in the future!

Fight Back Against Illiteracy!

One in six adults in Indiana struggles with illiteracy. It’s time to join the fight and
help ensure our friends and neighbors have all the help they need to break the
cycle of poverty and get a second chance at a better life.

Just $5 per month can make a world of difference. Start a Monthly Gift Today!