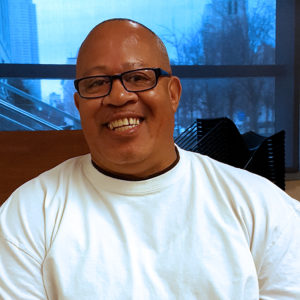 Kenny’s story starts with the same idea that sparks most Indy Reads students tosign up: It was time for a change.

“I struggled with my reading since I was a little kid,” Kenny says. “As I got older, I said, ‘Maybe it’s time I go back and better my life.'”

Kenny joined Indy Reads’ donor-powered Community Classrooms program in September 2017, just as the new program was starting up, and made a name for himself almost immediately.

Kenny comes in early every week to help set up the classroom, and helps encourage other students in their work. “Kenny is a hard-working student now,” says Chris, one of Indy Reads’ student navigators. “He’s helping us all grow.”

“Indy Reads helps me a lot. A lot,” Kenny says. “I wish I had found Indy Reads a long, long time ago.”