Students in our Community Classrooms come from a variety of backgrounds and bring their own experiences and perspectives with them. These perspectives contribute to the diverse community environment that make our classrooms unique. This month’s IndyGo Student of the Month, Cleon Bell, brings happiness and optimism to class every week. 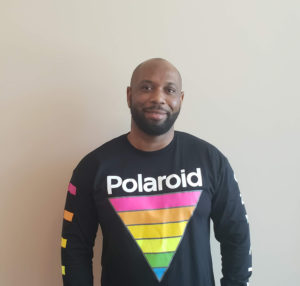 Cleon grew up in Jamaica, where he has fond memories of island life with his friends and family. He comes from a large family and has seven siblings — and Cleon is the only one who no longer lives in Jamaica. He loves his family, he says, but his family’s size limited his education options.

“School in Jamaica is not bad,” Cleon explained. “But when you come from a big family, that’s where the problem comes in.” He says if your family can’t afford to send everyone in the house to school, it may just be the oldest siblings who get to go.

Education through primary school (elementary and middle school) is free and accessible in Jamaica for children between the ages of 5 and 12. High school is when families have to pay tuition for their children. If the family has a large number of children, often only a select one or two are able to attend high school and further their education.

“Sometimes kids skip class because they have no money to send you,” Cleon said.

Cleon’s older sisters were already attending high school by the time he got through primary school, and his family couldn’t afford to send him. So he ended his formal education at a young age and began to look for work.

When Cleon was ready to enter secondary school, Jamaica still didn’t have subsidized tuition for high school. Though there are more systems in place to break down financial barriers today, families in the 1980s and 1990s had to make sacrifices.

After leaving school, Cleon was able to grow and learn by working at resorts and picking up odd jobs on the island. It was at one of these resorts where he met his wife, who was in Jamaica on vacation… from Indianapolis.

The two hit it off and eventually got married. For most of their relationship, they lived separately with her visiting Jamaica a few times each year. A few years ago, Cleon’s wife decided that it was time for him to come to the United States permanently.

He knew that once he moved to Indianapolis, he would have the time and resources to finally increase his education.

“Before I got here,” he said, “I was always telling my wife, ‘One of the first things I want to do: I want to get more than what I have.’” 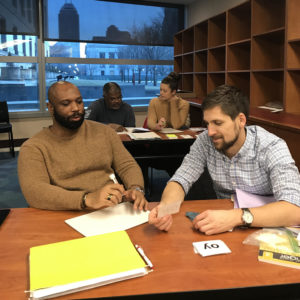 As soon as he settled into life in Indianapolis, Cleon and his wife sat down to look up educational resources for him. His wife remembered hearing about Indy Reads, and she knew it was the right way to go. After waiting a couple of months for a spot in the class to open, Cleon went through the orientation and enrollment process and was ready to tackle his education needs.

Eager to learn and grow, Cleon joined the Indy Reads classroom with determination and optimism and has been flourishing since. Indy Reads Instructional/Intake Coordinator, Christina says, “He helps put an ease in the classroom. Whenever there is a new student, I know we can count on Cleon to make them feel welcomed and comfortable. He is always happy to help his teachers too.”

Cleon’s Student navigator, Chris, describes Cleon as a practical but optimistic mentor in the classroom. “He gives good advice about life issues,” Chris says. “His outlook on life is real. He thinks about what will better him and his family life. He shuns the negative.”

“Indy Reads has enlightened me a lot,” Cleon says. “That’s the thing I love about it. I’m proof: This program works.”

Cleon is looking forward to applying to better jobs, working hard toward his dream of starting his own business. “Now I have a stable foundation. I can build and go straight up.”