In our classrooms, students learn much more than the fundamentals of reading. Michael Cook, this month’s IndyGo Student of the Month, is learning how to find himself after years of dealing with drugs and addiction.

He says, “It was like walking in the unknown and never finding your way out. Indy Reads is my way out.”

Michael grew up in Long Island, New York, as part of a large, often tumultuous, family. He spent a lot of his time feeling angry and frustrated. Schoolwork did not come naturally to him. He knew he had the ability to do better but just needed someone to step up and help him out. He felt his teachers pushed him through when what he really wanted and needed was one-on-one guidance. His educators did not have the time or resources to help him learn to read effectively. Because of this, he coasted by in school, spending his days as a self-proclaimed “rebel party kid.” By the time he was 18, Michael had lost all hope of truly learning and quit school.

Michael spent the next 10 years dealing with the highs and lows of depression, anxiety, and addiction. He was angry all of the time and could not figure out why. Without any help or resources, he turned to drugs as a way to cope with life. After one intense evening, Michael woke up the next day and thought to himself, “Man, I want to be somebody different than I am today.” After years of feeling lost and hopeless, Michael’s aunt invited him to move in with her in Indianapolis where she could provide him with a safety net. She introduced him to Indy Reads’ Community Classrooms program. “She had belief in me…that I could do better for myself,” he says. 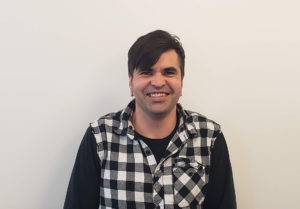 Despite all of the rough patches over the last decade, Michael says he always had a “glimmer of hope” that things would get better, “I always wanted to be able to pick up a book, write poetry, and get a job like everyone else.”

Eager to learn, Michael enrolled at Indy Reads in our Community Classrooms program and joined teacher Courtney Keating’s class. “I’ve been working with adult learners for more than four years and I don’t think I’ve ever had a student who is as hungry to learn as Michael is,” she says. “On the first day of class, he asked me if I promised to teach him. I couldn’t make that promise, but that I would never give up on him.”

Indy Reads is like my safe haven. What I do now, counts.

Michael’s classroom immersion was not easy at first. He was difficult to connect with and was often described as a “handful” and “stubborn” and that he “had a chip on his shoulder.” His instructor, Courtney, saw through all of that.

Courtney describes her early work with Michael as a challenging time. “I saw his outbursts as something else, something deeper,” she says. “Having had extensive training in trauma-informed care in previous positions, I knew instinctively that it was quite possible that Michael had experienced complex trauma. Instead of reprimanding his behavior, I embraced it. I made it my mission to create a safe place for Michael to be Michael all while letting him know that he is worthy and Indy Reads cares about him.”

Creating this space for Michael to learn and grow provided him the guidance and care he had longed for. “Indy Reads is like my safe haven,” he says. He now feels as though he can achieve his goals and says, “What I do now, counts.”

Finally having that safe haven to thrive, Michael has become a standout student in our program. He introduces himself to new students and makes a point of welcoming everyone. Student navigator Chris Simmons talks about Michael’s progress and says, “He was a handful when he first joined Indy Reads. He is now a focused man that feels he has purpose, and has appointed himself as the ‘classroom spokesperson’.”

This newfound purpose is motivating Michael to take positive steps. He is excited to read full books, write poetry, and fill out job applications. Reading and writing are now a huge part of his life, sparking joy he didn’t have before. He now says, “Today, I can wake up and smile.”

“Just today he told me that he is proud of himself, and to me, that’s so much more important in his journey than me being proud of him,” says Courtney. “He is learning how to love himself and seeing that he has value in this world. And I couldn’t be happier because that’s perhaps the most important thing I can teach someone.”

To those considering Indy Reads, Michael says, “I know how it is to be lost, alone, and scared. But people here want to push you to be better. It is a safe haven for people that are lost. I was scared too. It is about what you do with that fear. Are you going to fold or push past it?”

Michael’s work with Indy Reads is just the beginning. He says that he feels like a new man now, and would like everyone to know,

“My name is Michael Cook and the journey that I walk on is mine and no one else’s. The outcome of my journey is going to be everything I want and more.”

Previous StoryA Taste of El Salvador
Next StoryCooking with Confidence